Sue Wallman writes YA and it was the launch party for her debut novel, Lying About Last Summer, this week. To celebrate this momentous occasion, we have asked Sue to tell us a little bit about her favourite stationery.

My favourite pen, perhaps my favourite possession, is an old Parker fountain pen which was my mum’s. It was a gift from her parents and she used it for her O-level exams in the Fifties. She wrote official letters with it. Out of the blue, when I was a student, she handed it to me and said, “You can have this.” She said she knew how much I loved it. The nib has never been changed – the way Mum and I both hold it must be similar because it’s written smoothly for both of us. I use it often and I always sign anything of any significance with it – like my book contract!

I have another fountain pen, a Sheaffer, that needs a mention. It’s my Crackerjack pen. Crackerjack, for anyone too young to remember, was a terrible BBC programme that ran for years on a Friday at 5pm. My friend Annie and I got through local auditions and went to London to recite a poem in home-made costumes. It was a massive event in my childhood.

When it comes to notebooks, I have a new one for each project and I don’t like going bigger than A5 because then it’s awkward to carry around. I’m a fan of the Asda notebooks that look like Moleskines and cost £3. I go expensive occasionally: I have a little notebook from Liberty that’s faded to a lovely purple and has beautiful striped elastic. My middle daughter customised the front of a notebook with a collage for me a few years ago. She added a cottage because I have a fantasy of living in one with lots of pottery and quilts, and she’s superimposed my face on some Olympic swimmer with massive shoulders because I like swimming. Inside this notebook are the exercises I did at author Lucy Christopher’s writing workshop on place/setting – which led to me having the idea for Lying About Last Summer.

Who can resist a Sharpie? I have a whole drawer full of them. Whatever colour you need, I have. Call me sad but I love the sound of the click when the lid snaps on. I’m also keen on highlighters, pencils that can be sharpened to a fine point and Staedtler erasers because they don’t smudge. Oh and I’m very fond of the pencil case my 13-year-old made me for Christmas (from an old duvet cover).

For my book launch, I’ve had some pens printed with my book title and website address. They’re going to be take-home presents. So even if someone doesn’t like my book, they’ve at least got a pen!

Lying About Last Summer was published by Scholastic on 5th May 2016. It’s about 15-year-old Skye whose sister died in an accident. A year on, she goes to a bereavement camp, but when she’s there she starts receiving messages on her phone from someone claiming to be her dead sister. All of a sudden, she doesn’t know who she can trust, and she’s forced to face up to what happened the previous summer. 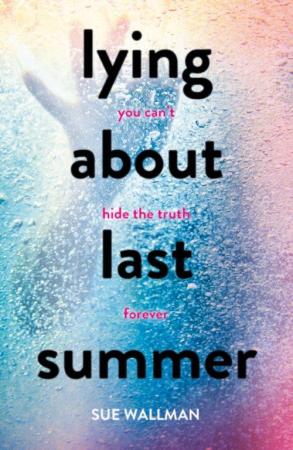 One thought on “Interview with Sue Wallman”