My favourite pen is my Montegrappa fountain pen. It’s a lovely weight in my hand and it writes beautifully (unlike me). It came in a posh box and it’s engraved with my name, although I don’t know if that will come out in the photos. It was a runner-up prize in the first writing competition I entered – the Montegrappa Scholastic Prize for New Children’s Writing, back in 2014. The pen awarded to the winner, Laura Wood, who writes the fabulous Poppy Pym mysteries, was like something out of a fairy tale – all shiny and swirly. Absolutely beautiful. I promised myself that my pen would remain unused until I had a book contract to sign, and so far I’ve used it twice for that purpose. I’m also using it for book signings, although I haven’t done many of those yet because most of my readers are in Germany. Sometimes someone sends me a copy of my own book through the post and asks me to sign it and return it. That’s a real thrill! When my book comes out in the UK next summer, I plan to flash my Montegrappa pen around a great deal. 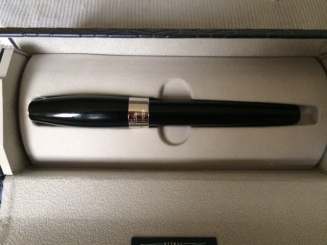 When it comes to notebooks, I like exercise book-sized ones with bright colours. I have a lovely one from the Van Gogh Museum in Amsterdam with his sunflowers on the cover. I also have a lovely hardback one featuring Klimt’s The Kiss. I bought that one in a charity shop. I prefer hard covers, but soft ones are sometimes more practical. I use loads of notebooks and try to have one with me at all times. I lose them quite often. I’ve never bought a really expensive notebook – it seems so extravagant. Maybe one day, I will.

I use a lot of post it notes, mainly to remind myself of details from my previous Gangster School books. I was writing the third one recently and I couldn’t remember who was the captain of which house at Blaggard’s School for Tomorrow’s Tyrants. I stick them on my notice board in front of my desk, so I don’t have to keep on looking up the same details. I used to have the memory of an elephant. These days it seems to have transformed into that of a goldfish.

I also use lots of drawing pins to stick things to my notice board – notes, postcards that I like the look of, certificates and tickets for future events. I recently found a birthday card that featured a dog who looks exactly like Gruffles, Charlie’s dog in my Gangster School books, so that has pride of place.

For everyday writing, I like black gel pens with a good ink flow and a medium nib. I don’t like them when your writing comes out spindly. I started using these when I was at university and I made sure I used them in all my exams. When you find a good writing pen it’s a buzz. The one in the photo is one of the best ones I’ve ever had. I’ll be bereft when it runs out.

Do business cards count as stationery? I think they do! I love my business cards – they’re shiny and purple and they have rounded corners. There’s a picture of the cover of Gangster School 1 on one side. I’ll include one in my photos.

My other recent purchase is also featured in one of my photos – it’s a rubber in the shape of the hedgehog. As you can see from its pristine state, I can’t bring myself to use it. But I like looking at it. It sits on my desk and encourages me. Sad, really.

My Gangster School series is being published in Germany by Piper Verlag. The first one came out in October and went into reprint after six weeks, so I’ve got high hopes for it. They will be publishing the second one in March 2018. I’ve just signed a contract for four Gangster School books with new UK publisher, ZunTold. The first one will be released next summer and the second next autumn. There’s been some interest from other countries, so I’m keeping my fingers crossed. I’m enclosing pictures of the first two German covers. I haven’t seen the artwork for the UK edition yet.

My website is katewiseman.uk My twitter name is @KateWiseman. Feel free to drop me a line. There’s also some stuff about Gangster School on the Piper Verlag website, if you speak German. @piperverlag