I treat pens like collectors’ items. Truly, I do. I don’t mean the ultra-fancy pens that cost hundreds and can only be viewed through glass cabinets, to be honest, I’m not particularly interested in them at all. Boring. No, I mean pens like Sharpies and anything cheap and cheerful that has any kind of glitter on them. They make me VERY happy. The Sharpie fixation, along with glitter gel pens, started as one pack of each when I needed to use various colours for the Golden Egg Academy Book Mapping course. Since then, if there is a special edition set of Sharpies within striking distance – metallics, pastels, you name it, I’m on it. 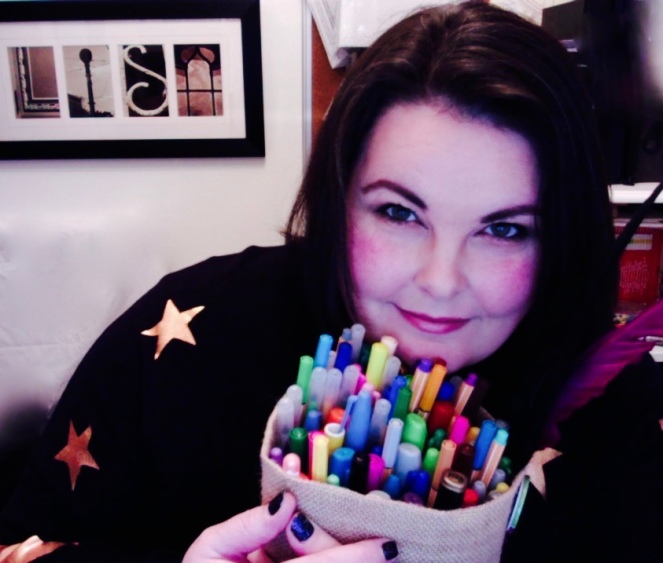 Saying all that, I do have one very special pen that I bought from Swarovski. It’s black and gold, squared-off around the barrel and encrusted with black Swarovski crystals. Sigh… I bought this pen when I made myself a promise – that I would one day use it in a book-signing of my debut novel. As my book baby was only released last month, I have not yet arranged a book signing, so it remains firmly in its little black velvet pouch, but one day… Mark my words little pen, you will see the dazzling light of day…

When buying notebooks, I mainly go for aesthetics. Which makes it all so much worse as there are so many cheap and lovely little notebooks on the market. Size – as long as I can get it in my handbag, and I have one A4 notepad on my desk at home for big scribbles. I don’t know if other writers find this, but I seem to get notebooks from anyone that buys me a gift on birthdays, Christmas… So the problem of space in my little office room isn’t really all my doing.

Other stationary I love? Sticky notes! Sticky notes! Sticky notes!  I LOVE them. I use them as bookmarks on pages to note inspiring prose or dialogue by other writers. I use them all over my desk and monitor to remind me of ideas that need to go into my own writing, and I use them for plotting. I have huge pieces of paper and a corkboard on the wall that are covered with sticky notes. Each note depicts a scene or important event in the story. I use sticky notes for this task so that I can move them around the board if needs be, reordering scenes and events.

In 2018, I have made a promise to myself that I will cut down on the pen purchases and use the ones I have! I’m not sure how long that will last, but all good intentions, right? Right?

Amidst all the stationary empire building, I write. Honest I do. I have always loved stories and those are not limited to books. Films, theatre and TV are also massive influences in my writing. It was an idea for an Arthurian MG book that first brought me to writing. And it was TERRIBLE!  But to this day, the concept is still intriguing. I’ll return to it eventually.

I went on to writing YA. This made my voice really shine and it was there that I found my real passion. Four novels later, I decided that I would attempt to get Broken Blue published. Unfortunately, it was perfectly the wrong time. Brick walls were met in the form of a rather slumpy YA market. The publishers weren’t taking it on as much as they used to.

I wasn’t willing to put Broken Blue in the digital drawer with the rest of my manuscripts and forget about it, because I really believed in its potential. That’s how I became an independent author. Broken Blue was published on Amazon on November the 5th 2017 (remember, remember…). I chose the best option for me and Broken Blue, and I’m so very happy I did.

Finally, if you want to read a little more about my work, or get in touch, come and visit me on my website at https://www.lisacurrybooks.com/, or if you’re a fan of Twitter it’s @LisaCurryBooks, and finally, if like me, you’re still a bit old-school, you find me on Facebook at https://www.facebook.com/lisacurrybooks/

Thanks for stopping by! Lx

One thought on “Interview with Lisa Curry”